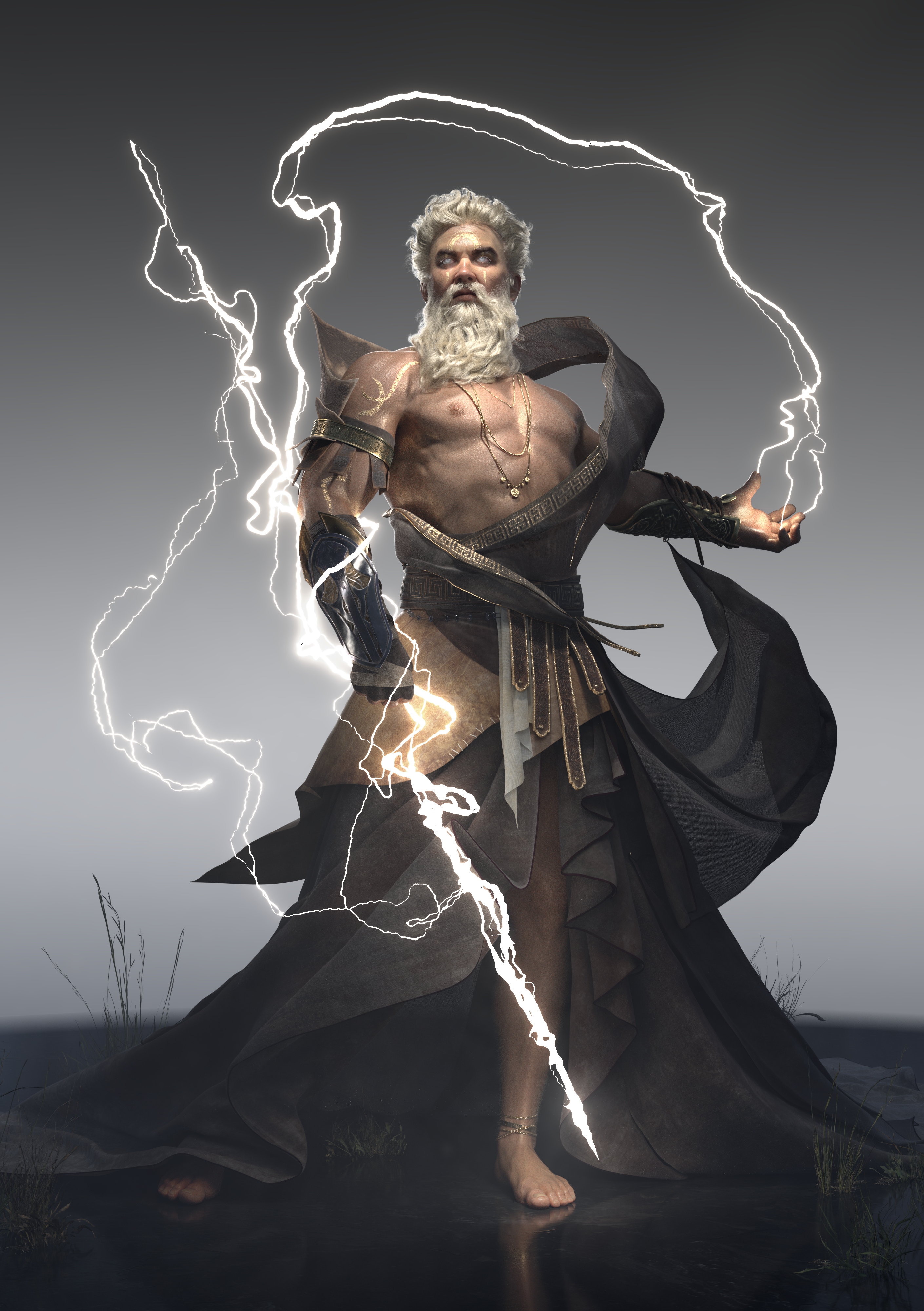 Hi there! In this breakdown, we will be going over my most recent character project Zeus. I will highlight the key workflows in character design and creation, and I will share tips and tricks that helped me get this project to the final render. After finishing this breakdown you should be able to understand the creative process and some key pipeline steps necessary to end up with a stunning piece.

When it comes to gathering references you can expect to add a lot more images and references during the production. However, building the initial foundation of references for both the assets and the mood is crucial.

One of the most important parts of creating a project is to know what feeling you want to convey to the viewer looking at the final image. If that goal is clearly defined, then the priority can be shifted towards the assets that will support that goal the most.

Even when likeness isn’t the purpose of the challenge, discovering totally different angles of a well-known individual could be a nice begin. For Zeus’ likeness reference I selected images of Jeff Bridges. Evaluating the angles of those footage and screenshots of my ZBrush file was useful to guage totally different angles and examine for discrepancies. Making these collages may also be a good way of monitoring progress over time.

Jeff Bridges lineup with different ZBrush Screenshots, drawing lines on top of these collages can help judge the angles better

The Marvelous Designer Pinning tool (pressing W to place and remove pins) allows making clothing that would normally not be possible to create.  In my concept’s case, pins made it possible to create specific fabric folds that were caught mid-air. Making this garment took a lot of time, freezing and solidifying parts of the cloth to keep the generated folds and pinning everything in place. The cloth on his shoulder was posed with the wind tool pointed upwards. To save time with retopology, I mainly used rectangular pieces of cloth to get a good result from Marvelous’ remeshing option.

Take a look at Rendering the Blockout

Getting an early view of how the renderer goes to see the mannequin can assist right points with proportion and gesture extra simply, versus later within the challenge when numerous equipment have been added. I pushed Zeus’ pose a bit extra after getting these renders, making the compositional S and C curves of his physique extra pronounced to make him extra dynamic. 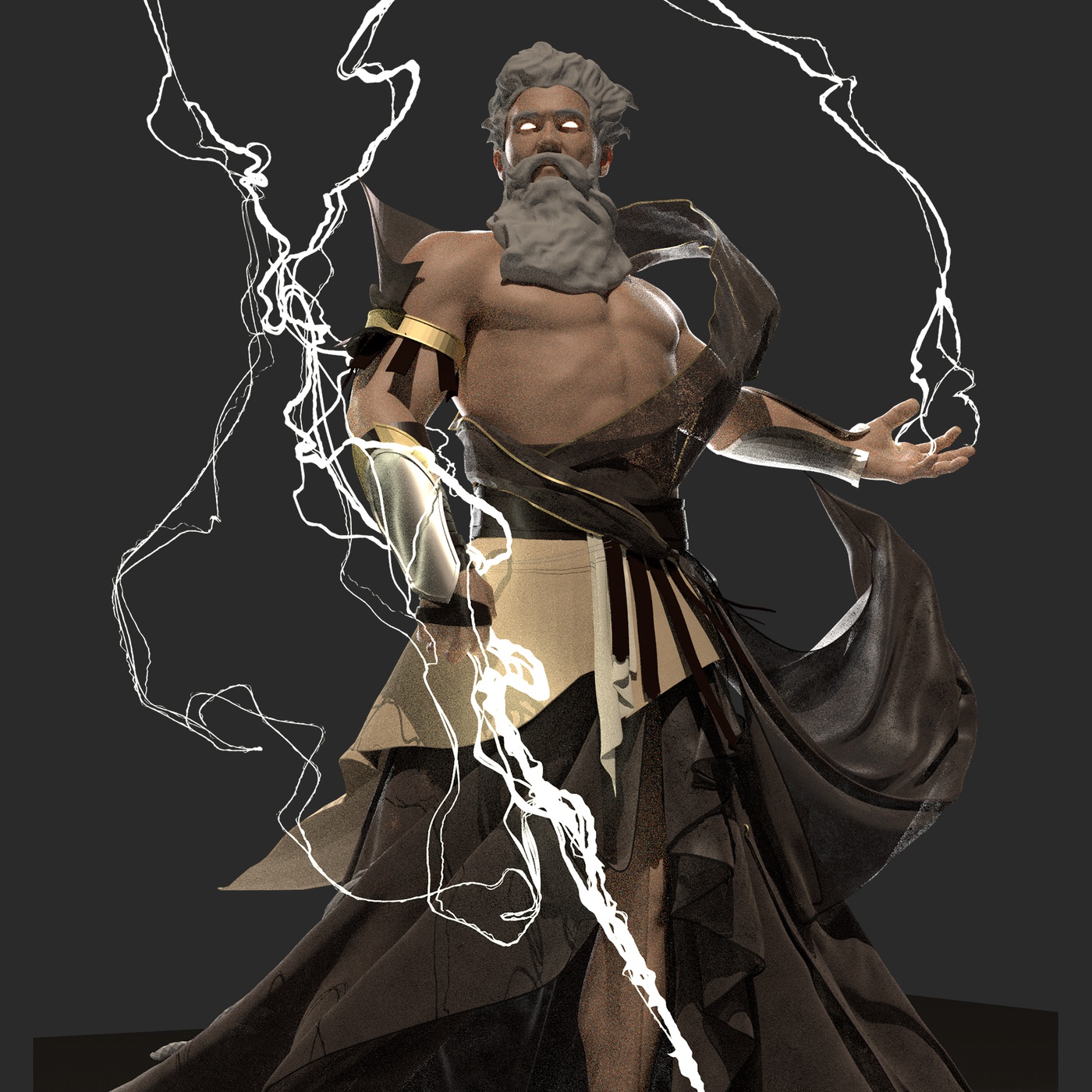 This stage is also great for figuring out camera settings, light placement and a finding fitting HDRI

Refining the face shapes was a continuous step for me, going back and forth, making sure the shapes of the face remain round and fleshy as my mentor would say. Zeus’ face has some exaggerated features, for example, his cheekbones and temple area that were inspired by marble sculptures like The Bust of Neptune by Lambert-Sigibert Adam.

Getting almost real-time feedback on how the pores and wrinkles would look on the model was great, but working with those big file size textures was a bit taxing on my machine.

I created the lightning asset early on because it’s a central piece in the concept. Drawing curves over the concept and extruding cylinders along these curves gave me the base to work with. I converted the base to a dynamesh object in ZBrush, used the Snakehook and Move Topological brushes to arrange it into the shape needed. The uneven shapes were achieved using the Inflate Balloon slider under the Deformation palette. Making this mesh into a lightsource turned out well since it gave me the same light interaction on the skin, armor, and clothes that I saw in the concept.

To make the ornaments on his armor I arranged patterns on screenshots of the UVs in Photoshop. Then by applying these textures in ZBrush and masking by the intensity of the color, I got these patterns transferred onto the asset. Now, all that’s left to do is inflate under the Deformation menu and break up the shapes in the sculpting pass.

To texture the skin I used a base of tileable textures, made using the Make It Tile Photo node in Substance Designer. On top I added some blemishes and undertones, golden details, and a layer of projected skin textures. For this texture projection I used a photoset from 3d.sk after grading the pictures in Photoshop to remove as much lighting information as possible. Grading a picture once and making it into a Photoshop Action can save a lot of time here.

When it came to working with the cloth, I picked out a woven fabric displacement pattern with a matching opacity map and created a V-Ray shader for it. I prefer to work with layered textures and masks to break up the cloth texture, rather than texture it outside of Maya first. Laying out the UVs of the cloth so that they all match the orientation of the 3D space is great when adding mud or dust. This way more grunge can be added to just the bottom by masking with a broken-up gradient. Adding sheen in the V-Ray shader can give the cloth a silky finish that contrasts well with dry mud or dust.

A good starting point for XGen guides is sculpting the volume and shape of the hair in ZBrush. This hair blockout can then be made into a live surface in Maya which allows you to draw curves on top. These can then be converted to guides in the Utilities menu of XGen. Still, I would say it’s necessary to add more guides to interpolate between extreme strands and give the beard a pleasing, cohesive shape with no intersecting hair.

XGen remains to be fairly finicky and may result in some issues, so saving many variations is essential. In the case of the information placement, it’s a good suggestion to begin with just a few guides however add a lot later, so it’s not the modifier’s job to outline the form of the coiffure. As a basic rule, I add 3 layers of clumping to a coiffure, every having 3 occasions extra clump guides than the one earlier than. Additionally including a reduce modifier, one basic noise breakup and one huge noise breakup with a stray operate assist with promoting the realism. 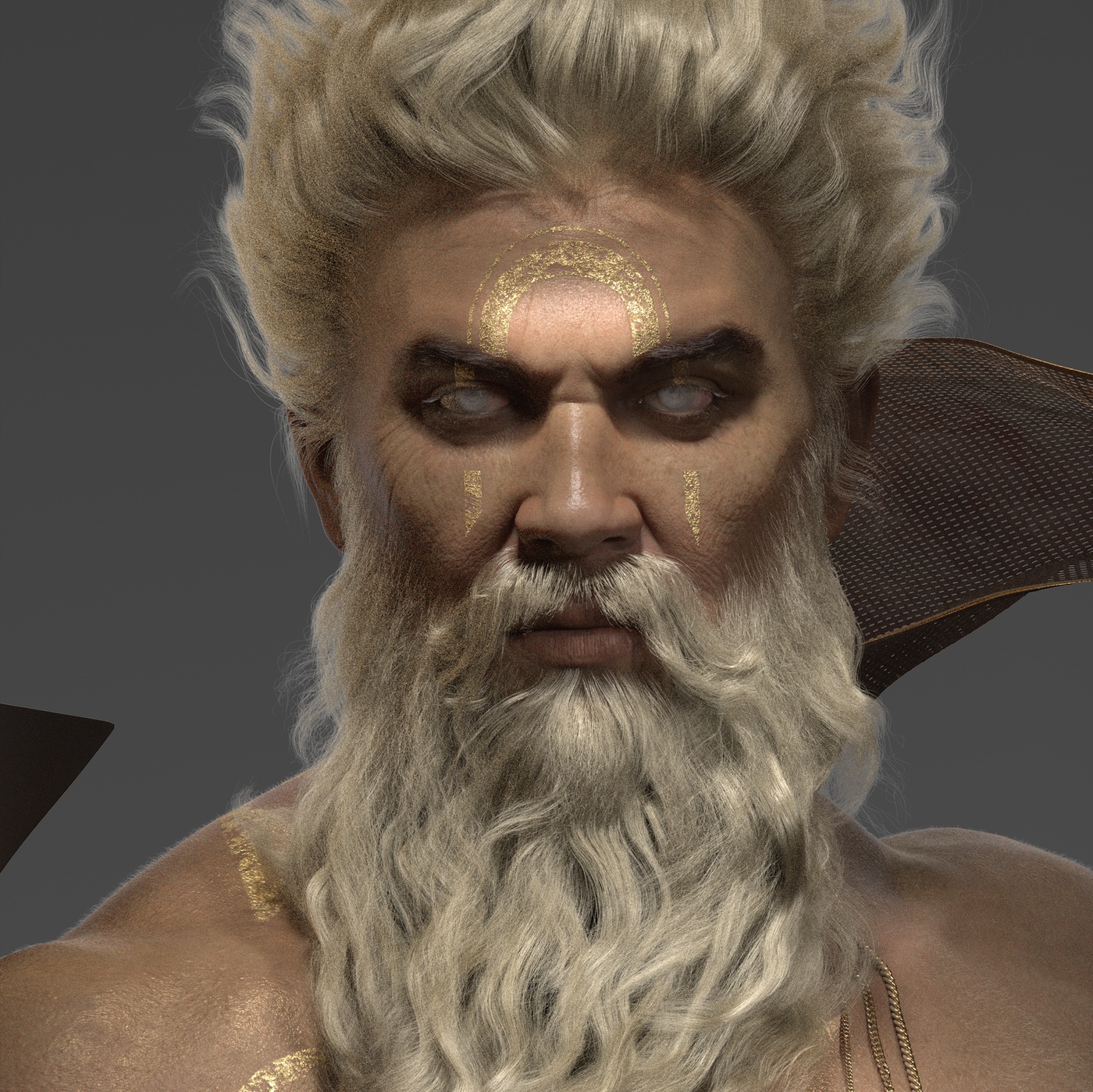 The lighting setup was quite standard in this project: I started with a 3-point rig, with a few extra lights to guide the eyes of the viewer. The main light comes from the top right and highlights the muscle definition on his chest alongside casting a shadow from his eyebrows, making his bright eyes stand out against the darkness that surrounds them. The fill light is much bigger but less bright and mainly lights his clothing. The rim light casts a halo of light around his hair and defines the contours of his body, it also highlighted the body hair in the final render and showed off the see-through properties of the woven cloth.

Rendering this project was a challenge. I wanted 4k renders to show off all the details, but one frame ended up taking 7-9 hours. In the future, splitting the scene into different layers and rendering things like atmosphere with higher noise thresholds, could help here. For compositing, adding many render elements in V-Ray and saving the renders as EXR files was a fast way for me to get everything into Nuke and do some color corrections as well as adding a background.

After spending so much time carrying the model through the complete pipeline, playing with different render scenarios was one of the most fun aspects of a project. Putting the character into different lighting situations, trying out colors and compositions, putting a surreal spin on it – anything goes. Sometimes there are happy accidents to be found here, sometimes the original vision was the best. For me, this step is important because it keeps my artistic curiosity and love for the craft alive, especially after a long project haul.

The story of your art should be clear to the viewer, what they should feel or think about. The presentation of the final piece can make or break how people see it, so make sure you know where your focus lies.

It can be deceptively easy to get used to mistakes, especially after working on the same visuals for many hours a day. So, take a step back, look at it from afar, take a screenshot and mirror it, take some time off, and ask for feedback from a trusted source.