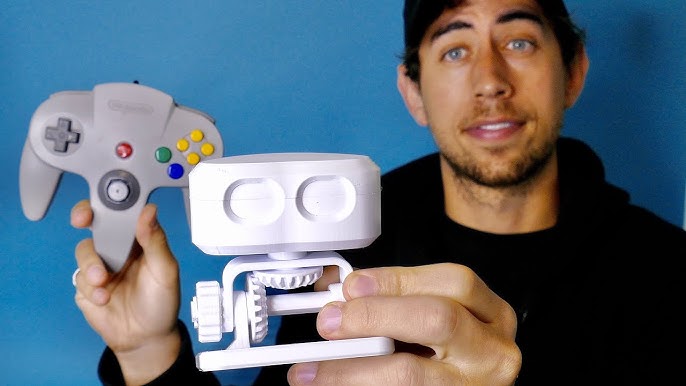 Meet RobBob, a 3D-printed robotic head that works with an N64 controller

Impressed by a particular two-axis mechanism that makes use of a pair of beveled gears to create panning and tilting motions, maker and YouTuber JBV Inventive wished to combine it into a bigger kinetic sculpture that would transfer electromechanically whereas additionally trying nice on the identical time. This led to the creation of RobBob, which is basically a robot-shaped head that has been positioned onto a pan/tilt system.

Initially, RobBob may solely transfer with the assistance of an individual turning a pair of opposing knobs — one for every axis. However after some minor additions, together with mounts on either side for a single servo motor and adapters that enable servo horns to connect to the knobs, RobBob may now transfer by itself energy. At first, JBV thought of utilizing a serial monitor to ship rotation instructions, though he finally settled on an N64 joystick because it was a extra pure alternative for fluid movement.

After writing a small program, which takes in joystick knowledge from the N64 controller and converts it into positional knowledge for the servos, JBV loaded it onto an Arduino Uno. To see RobBob in motion, try JBV Inventive’s demo/construct video under or learn extra concerning the challenge on his web site.